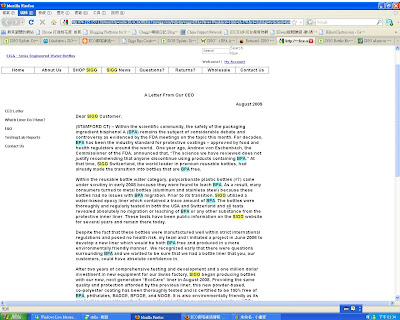 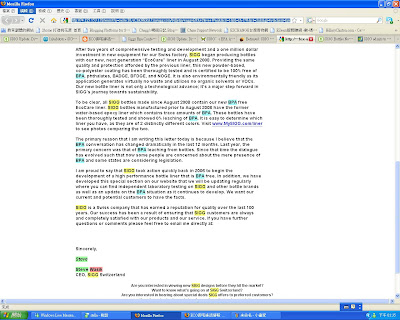 寫了一大堆，重點只有這一句：
SIGG bottles manufactured prior to August 2008 have the former water-based epoxy liner which contains trace amounts of BPA.
SIGG在2008年8月之前生產的水壺使用含有雙酚A(BPA)的塗料。

(STAMFORD CT) – Within the scientific community, the safety of the packaging ingredient bisphenol A (BPA) remains the subject of considerable debate and controversy as evidenced by the FDA meetings on the topic this month. For decades, BPA has been the industry standard for protective coatings – approved by food and health regulators around the world. One year ago, Andrew von Eschenbach, the Commissioner of the FDA, announced that, “The science we have reviewed does not justify recommending that anyone discontinue using products containing BPA.” At that time, SIGG Switzerland, the world leader in premium reusable bottles, had already made the transition into bottles that are BPA free.

Within the reusable bottle water category, polycarbonate plastic bottles (#7) came under scrutiny in early 2008 because they were found to leach BPA. As a result, many consumers turned to metal bottles (aluminum and stainless steel) because these bottles had no issues with BPA migration. Prior to its transition, SIGG utilized a water-based epoxy liner which contained a trace amount of BPA. The bottles were thoroughly and regularly tested in both the USA and Switzerland and all tests revealed absolutely no migration or leaching of BPA or any other substance from the protective inner liner. These tests have been public information on the SIGG website for several years and remain there today.

Despite the fact that these bottles were manufactured well within strict international regulations and posed no health risk, my team and I initiated a project in June 2006 to develop a new liner which would be both BPA free and produced in a more environmentally friendly manner. We recognized early that there were questions surrounding BPA and we wanted to be sure that we had a bottle liner that you, our customers, could have absolute confidence in.

After two years of comprehensive testing and development and a one million dollar investment in new equipment for our Swiss factory, SIGG began producing bottles with our new, next generation “EcoCare” liner in August 2008. Providing the same quality and protection afforded by the previous liner, this new powder-based, co-polyester coating has been thoroughly tested and is certified to be 100% free of BPA, phthalates, BADGE, BFDGE, and NOGE. It is also environmentally friendly as its application generates virtually no waste and utilizes no organic solvents or VOCs. Our new bottle liner is not only a technological advance; it’s a major step forward in SIGG’s journey towards sustainability.

To be clear, all SIGG bottles made since August 2008 contain our new BPA free EcoCare liner. SIGG bottles manufactured prior to August 2008 have the former water-based epoxy liner which contains trace amounts of BPA. These bottles have been thoroughly tested and showed 0% leaching of BPA. It is easy to determine which liner you have, as they are of 2 distinctly different colors. Visit www.MySIGG.com/liner to see photos comparing the two.

The primary reason that I am writing this letter today is because I believe that the BPA conversation has changed dramatically in the last 12 months. Last year, the primary concern was that of BPA leaching from bottles. Since that time the dialogue has evolved such that now some people are concerned about the mere presence of BPA and some states are considering legislation.

I am proud to say that SIGG took action quickly back in 2006 to begin the development of a high performance bottle liner that is BPA free. In addition, we have developed this special section on our website that we will be updating regularly where you can find independent laboratory testing on SIGG and other bottle brands as well as an update on the BPA situation as it continues to develop. We want our current and potential customers to have the facts.

SIGG is a Swiss company that has earned a reputation for quality over the last 100 years. Our success has been a result of ensuring that SIGG customers are always and completely satisfied with our products and our service. If you have further questions or comments please feel free to email me directly at: